When my son was about two, I made the mistake of eating chili for dinner. I was breastfeeding, but nobody had ever told me to avoid spicy foods. Anyway, that night around 2 in the morning he woke up with projectile vomiting. We noticed because he was sharing our bed. Let me tell you, they call it projectile vomiting for a very good reason.

A week or two later, it happened again. We figured it out. No chili.

A couple of months later, I noticed that it took several extra hours to get him to bed on nights that I had chocolate chip cookies with my lunch.

Then, a chiropractor friend of mine suggested we take our son (and me, since I was still nursing) off dairy. Our pediatrician was getting ready to put tubes in our son's ears because of frequent ear infections. We stopped eating dairy and the ears cleared up, so the ear doctor decided not to do the operation. From then on, as long as we stayed away from dairy, no more ear infections.

As the years went by, we got in the habit of looking at food and what we were eating as possible culprits for all kinds of issues. With lots of experimenting, mostly trial and error, we found that fruit, of all things, made our son hyper. He could tolerate sugar pretty well, but one blueberry would have him bouncing off the walls.

When we went out to dinner, he would curl up into a ball on his chair after eating, until we stopped giving him soda with his meal as a treat.

His acne was so bad as a teenager, I was really worried he would scar for life. We tried topical treatments, but didn't want to medicate him, as he's so sensitive. Finally, we found the culprit - eggs! He stopped eating eggs, and all products that have eggs in them, and the acne cleared up.

I hear more and more about kids with sensitivities to foods. Adults too. When I changed my diet, I stopped having headaches, heart palpitations, constipation, itchy skin, sore throats... the list goes on and on. I hope that other parents will do as I did and look at what you're eating and feeding your family. Experiment with your diet. Pay attention to what you eat when problems arise. It just may be that it is your diet that is making you sick.
Posted by Amy Syd at 8:14 PM No comments:

Or is this the stuff that is supposed to happen? Perhaps life just decided things were going along too smoothly there, and we needed a little stirring up. Perhaps we needed to be knocked a little off balance so we can learn to find that balance again.
Posted by Amy Syd at 9:59 PM No comments:

What do you do when you have a child who desperately needs to have their own way? They try to run the family.

When our son was little, he was always trying to tell us what to do. We used to say jokingly, “This child is going to grow up and become a dictator of some foreign country.” There was this constant tug-of-war between what he wanted and what we wanted.

We heard the saying somewhere – “Pick your battles” – and used it often. We would dig in our heels only when it really mattered.

As he grew older, we discovered other techniques that worked, too: distraction, bargaining and finally - discussions; we listened to his point of view and he listened to ours. It was often easy to find a solution then. The best solutions were the ones we agreed on together. He would sometimes surprise us with a solution that we hadn’t thought of ourselves.

Our son is grown up now and recently I began to wonder if somehow my husband and I fostered this personality trait in our son. We both had a parent that was unusually controlling and being the second born in both our cases, we grew up feeling we had very little control.

Is it a coincidence that we produced a child who has the same needs and continues to create that same tug-of-war feeling in us?
Posted by Amy Syd at 3:36 PM No comments: 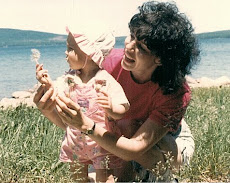